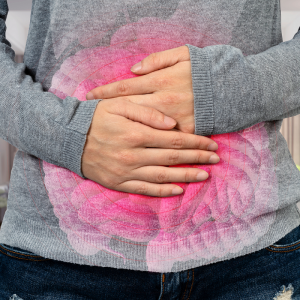 SIBO can occur for a variety of different reasons. It could be the shape of the GI tract or a GI tract abnormality, Immune system dysfunction, or enzyme deficiency. The two most common predisposing factors contributing to bacterial overgrowth are diminished gastric acid secretion and small intestine dysmotility. (1) Gastric acid is important because it suppresses the growth of ingested bacteria. Diminished acid production in the stomach (hypochlorhydria) is a risk factor for developing SIBO. Hypochlorhydria is very common with age, stress, following an Helicobacter pylori infection, use of PPI medication, or due to dietary inflammation. (1) Unfortunately, this can be compounded by the fact that many people with hypochlorhydria experience symptoms of reflux due to the low stomach acid. They are often given acid-lowering medication such as proton pump inhibitors because of their reflux symptoms which lowers the gastric acid content even more. Often these people need to be supplemented with something that will help restore the acid in the GI tract instead.

Motility disorders are extremely common with SIBO, most commonly disruption of the migrating motor complex (MMC). In between meals or during periods of fasting, the MMC goes through every 80-120 minutes to sweep out debris such as food particles, bacteria and other digestive products. When the MMC is not functioning properly bacteria is not effectively swept from the small intestine into the colon where they can be eliminated. When not properly swept out of the small intestine bacteria are able to proliferate and colonize, leading to symptoms and more dysfunction. There has been a correlation with MMC dysfunction and increased prevalence of SIBO. A common cause of MMC dysfunction is a condition called gastroparesis, delayed stomach emptying, and is commonly developed in those with diabetes, connective tissue disorders, following viral infections, or lack of blood flow. (1)

In SIBO, the bacteria cause fermentation of food through diet intake with leading to the production of hydrogen, methane and carbon dioxide gases. This contributes to symptoms of distention, bloating, flatulence and pain. Methane can slow gut transit time resulting in constipation. SIBO is often more association with diarrhea, however, with a high predominance of methane constipation could be more common or a mixed IBS picture. (3)

In addition to bacteria producing hydrogen, methane and carbon-dioxide, other bacteria associated with SIBO are sulphate reducing bacteria. These bacteria have been shown to produce hydrogen sulfate. This may also lead to an over production of hydrogen sulfate. An association was linked to this production and visceral hypersensitivity. A recent study showed that this hydrogen sulfate could also induce contraction of detrusor muscle in the urinary bladder. (5) Having an overgrowth of hydrogen sulfate, more GI tract pain could be seen than with other types of bacterial overgrowth.

Knowing the correlation of SIBO and IBS has put an organic cause on IBS where generally it was thought to be a psychosomatic disorder. (3)

Once bacterial overgrowth is present it may induce an inflammatory response in the intestinal lining further exacerbating the typical symptoms of SIBO. (1)

There are complications that can occur with having small intestinal bacterial overgrowth. The complications can range from mild to severe and include vitamin deficiencies from nutrient malabsorption, neuropathy due to fat-soluble vitamin deficiency, protein deficiency, and weight loss. Protein malabsorption can occur because of digestion by bacteria. These bacteria utilize the proteins from food and lead to increased ammonia production as well as a number of other toxic compounds that may damage the brush border of the enterocytes (intestinal calls), leading to increased permeability in the GI tract. (3) These bacteria using up the protein leaves little to be absorbed and used by the body. B12 deficiency is a common complication of SIBO. Since bacteria that does not belong in the small intestine is present, this disrupts the amount of “normal flora” in the small intestine. This bacteria can be up taking B12 from dietary sources instead of it getting absorbed by the intestines, leading to deficiency. Folate levels are often elevated due to bacteria in the small intestines producing folate. (1)

Carbohydrate malabsorption develops with SIBO as a result of premature breakdown of sugar along with decreased enzyme activity to break down carbohydrates due to inflammation of intestinal lining. (1) Deficiency of lactase enzyme is common with SIBO resulting in maldigestion of certain carbohydrates such as lactulose, sucrose and sorbitol. This leads to increased fermentation in the GI tract, leading to increased gas production. Fructase deficiency is also common due to the inflammation in the intestinal cells’ brush border due to SIBO. (1) Often some dietary restrictions are necessary to help with this issue.

Certain populations of people are more at risk for developing SIBO than others. Those with Irritable bowel syndrome, metabolic disorders such as diabetes that over time can impair the GI tract, aging, celiac disease, chronic diarrhea, chronic alcohol use, chronic GI inflammation and patients using anti-acids such as proton pump inhibitors. (1) Having a chronic condition that affects the GI tract can also put someone at risk. Those with inflammatory bowel disease such as Crohn’s, Ulcerative colitis, auto-immune conditions such as scleroderma, hypothyroidism, and those taking other medications that slow down the GI tract such as narcotics will also have increased risk of developing SIBO due to the effect on the GI tract of these conditions. (2)

In order to be diagnosed with SIBO, some testing needs to be performed. The most common type of testing is a breath test. These tests require ingesting something such as lactulose that the bacteria can metabolize and produce gas to be measured by the test. Typically hydrogen and methane are measured over a 2-3 hour period. If elevated then a positive result would indicate the presence of SIBO. There is also now a test available for hydrogen sulfate as there may be over production of this gas as well that can measured and sometimes will show positive even when the typical hydrogen and methane do not show positive.

There are many treatment options for SIBO. One of the most common is treatment with antibiotics The most common anti-biotic is called Xifaxan (rifaximin) and only targets killing those bacteria that are producing the hydrogen and methane gasses. If methane is elevated it is common to add neomycin to the Xifaxan. In addition to killing the bacteria, the underlying cause must be addressed such as disordered GI motility. To keep the MMC moving, a pro-kinetic agent is often used that will stimulate the movement of the MMC to prevent reoccurrence. A Low FODMAP or other similar diet that restricts certain carbohydrates and fruits is often utilized to help further starve out any bacteria that weren’t killed with the antibiotic treatment.

SiBO is common to reoccur in those that have already had it and some of that has to do with the underlying causes not being addressed. It is very common to occur when the GI motility is not addressed.

As you can see, SIBO can be a complex illness as it can disrupt functioning of the GI tract, nutrient absorption, inflammation, and permeability. This disruption can lead to symptoms of irritable bowel syndrome, diarrhea, constipation, gas, bloating, and cramping. You no longer have to be told that IBS is all in your head. There are testing and treatment options available now. If you are having any of these symptoms you should talk to your doctor about SIBO or see a Naturopathic physician to help you get the right testing and treatment options.