Are you tired? Do you experience brain fog, hair loss, or restless legs? Do you feel a need to chew on ice or eat strange things like dirt or non-cooked rice? If so, read on because you might be suffering from iron deficiency. Iron deficiency is the most common nutrient deficiency in the world. It is also the most common cause for anemia1. Iron is needed for oxygen transport in the blood, energy production, and many enzymatic processes, including hormone and neurotransmitter synthesis. So, you can see that having the right amount of iron is important for good health; however, iron levels are often not checked, and inflammatory conditions can make iron deficiency a little more difficult to detect. If iron deficiency is discovered, the first-line treatment is oral supplementation. The problem is that oral supplementation is not tolerated well by most people. Intravenous aka IV iron therapy is emerging as an efficient, effective, and well-tolerated way to reverse iron deficiency and iron deficiency anemia for many people. Iron is a nutrient that is critical for survival, and perhaps that is why the body does not have a good way of getting rid of iron other than blood loss. The main way that the iron level is regulated in the body is through dietary absorption. When a person’s iron level is high, the production of a protein called hepcidin increases, and this protein blocks iron absorption and release into the blood. Hepcidin is also increased in many chronic diseases due to elevated levels of inflammation. When a person has a low level of iron and no chronic source of inflammation, hepcidin is low, allowing iron to be absorbed from the diet.

The main causes for iron deficiency are blood loss (due to heavy menstrual bleeding, frequent blood donation, occult gastrointestinal bleeds due to ulcers or cancer), inadequate dietary iron (due to vegan/vegetarian diets), or impaired absorption of iron (due to celiac disease, autoimmune gastritis, irritable bowel disease, or other digestive disorders). When the total iron stores are low, it is called an absolute iron deficiency. However, as previously mentioned, inflammation increases hepcidin, which reduces absorption of iron, but it also reduces access to the iron stores that a person already has. This can lead to something called a “functional iron deficiency” and can occur in infections, cancer, heart failure, chronic kidney disease, and other conditions2.

Anemia is a condition that involves the red blood cells where one or more of the following is reduced: red blood cell (RBC) count, hemoglobin concentration, and/or hematocrit. The World Health Organization defines anemia as a hemoglobin concentration under 13 g/dL for men and under 12 g/dL for women.3 Anemia can show up in a variety of ways like with red blood cells being either very little or very big, and it can be caused by many different things. While it is not difficult to detect when anemia is present, it can be more difficult to figure what is causing it, and sometimes the cause can be multifactorial.

Iron is required to make hemoglobin, which is the part of red blood cells that carries oxygen around in the body. Oxygen is required to make energy aka ATP in a process called aerobic respiration. This is so important that iron deficiency anemia is a consequence of longstanding iron deficiency because the body will pull iron from its iron stores in ferritin and other tissues to preserve erythropoiesis or the synthesis of red blood cells. Anemia that is caused by iron deficiency typically shows up as microcytic and hypochromic. That is, the red blood cells are small and pale due to deficient hemoglobin production. This is reflected on a complete blood count (CBC) with low values for MCV, MCH, and MCH.

What Are the Symptoms of Iron Deficiency?

Iron deficiency anemia is a condition involving an impaired ability to transport oxygen, which is required for energy production, and so it is no wonder that the most common symptom is fatigue. Other symptoms include shortness of breath, loss of concentration, dizziness, exercise intolerance, hair loss, and many more. Again, iron deficiency anemia is a late-stage consequence of iron deficiency, and since iron is involved in more than just hemoglobin synthesis, many people who have iron deficiency without anemia experience a range of symptoms. Other symptoms associated with iron deficiency include restless legs, anxiety, heart palpitations, pica (a craving for non-food items) or pagophagia (pica specifically for ice). 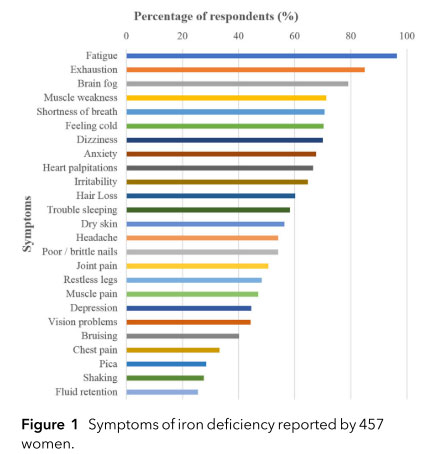 Image from “The Misogyny of Iron Deficiency” by Dugan et al.

Researchers asked women on social media about their symptoms related to iron deficiency to get an idea about the range and prevalence of symptoms. The graph above shows the results of their study. The authors conclude, “The impact of iron deficiency is independent of haemoglobin levels and is associated with a multitude of symptoms that affect both mental and physical health as well as work productivity.”4

Who Is Affected by Iron Deficiency?

Children, menstruating women, pregnant women and people in low- and middle-income countries are particularly affected by iron deficiency, but iron deficiency is common in high-income countries as well.5 As discussed previously, iron deficiency can be the result of inadequate dietary intake. Iron in plant-based foods is more difficult to absorb than from animal foods; therefore, people consuming vegan or vegetarian diets are at increased risk. Even if there is adequate iron in the diet, certain conditions like celiac disease, autoimmune gastritis/pernicious anemia, H. pylori infection, and other digestive diseases can lead to reduced absorption of iron.6 Iron deficiency is also common in cancers, chronic kidney disease, irritable bowel diseases (IBD), chronic heart failure, and inflammatory conditions like rheumatoid arthritis and other autoimmune conditions.7 Therefore, iron status should be assessed and managed if indicated in all of these conditions.

Oral iron supplementation has historically been the first-line treatment for iron deficiency.7 A randomized controlled trial looked at the effect of oral iron supplementation in 198 menstruating non-anemic women who had ferritin levels under 50 mcg/L who were experiencing unexplained fatigue. They were divided into two groups: one taking oral ferrous sulfate with 80mg of elemental iron and the other taking placebo. After 12 weeks of supplementation, fatigue was significantly decreased by 47.7% in the iron supplementation group compared to 28.8% in the placebo group (p = 0.02).8 The main adverse events reported were gastrointestinal symptoms, which were not significantly different between the iron and placebo groups. This was a group of otherwise healthy women with mild iron deficiency, and overall, this treatment appeared to be well tolerated and beneficial.

Because oral iron supplementation is generally not well-tolerated, and because in the presence of inflammation iron absorption is significantly reduced, intravenous iron therapy is beginning to be recognized as the most efficient way of correcting iron levels and providing fast relief. There have been lingering misconceptions that IV iron is associated with severe hypersensitivity reactions, but a meta-analysis by the Mayo Clinic found no increased risk for serious adverse events with IV iron therapy compared to controls.2

IV iron therapy is a safe and effective way to quickly address iron deficiency, iron deficiency anemia, and functional iron deficiency due to inflammation because it bypasses the hurdle of intestinal absorption. Of course, it is always important to address the reason that the iron deficiency developed in the first place, but when it comes to restoring iron levels, IV iron is appropriate for the following:
• Those who have not benefited from oral supplementation.
• Those who do not tolerate oral iron.
• People with IBD, chronic kidney disease, heart failure, or inflammatory conditions like rheumatoid arthritis.

If you suffer from fatigue or other symptoms related to iron deficiency, it is important to have your iron status properly assessed because iron deficiency is easy to treat, and IV “iron repletion is a transformative therapy that can have major bearing on clinically relevant outcomes and overall well-being.”2 IV iron therapy is offered at Kirkland Natural Medicine.